Which camera brands have the best community? (Part 1)

I thought it would be fun to take a look at the relative friendliness of communities centered around different camera brands. I developed some simple metrics to look at this, with some fairly interesting results – both for those interested in getting into a camera system, and for those managing the relevant communities.

I was specifically interested in the thumbs up mechanism on the DPReview forums. I had noticed that some communities use this intensely, while others hardly use it at all. On the first page of a forum, 60 posts are displayed by default, which I judged to be a sufficient dataset to get a fairly solid first impression (this first post has no conference intervals or p-values – if there is interest in such a scientific approach, I may do a follow-up post for that).

So I looked at 33 forums defined by the type of camera used, and one additional, “control” forum that was not based on type of camera used, although it plays no great role here. I recorded the number of likes on each thread-opening post (TOP) as well as whether this first post contained any images (yes/no). (For those that like big numbers, this means the total number of datapoints was over 2000: 1980 for the camera-specific forums plus 60 for the control.)

List of communities sampled (in only vaguely sensible order, sorry):

So, in terms of that data, what would characterise a friendly community? I initially naively reasoned that a high average number of likes per TOP would be a good metric. However, I subsequently realised that it may feel far more important to a contributor whether ANYBODY liked their post, so I then focused on the number of posts that hadn’t gotten a response. There is generally a correlation between the two:

I also wanted to rule out community size as a factor. A small camera community might be friendly, but not be able to give so many likes because each member can only give one like per post, max. So I computed a simple size-adjusted additional metric for each primary metric.

What dropped out of the analysis most strikingly, though, was the immense influence of picture posts. Picture posts get liked with a high probability: 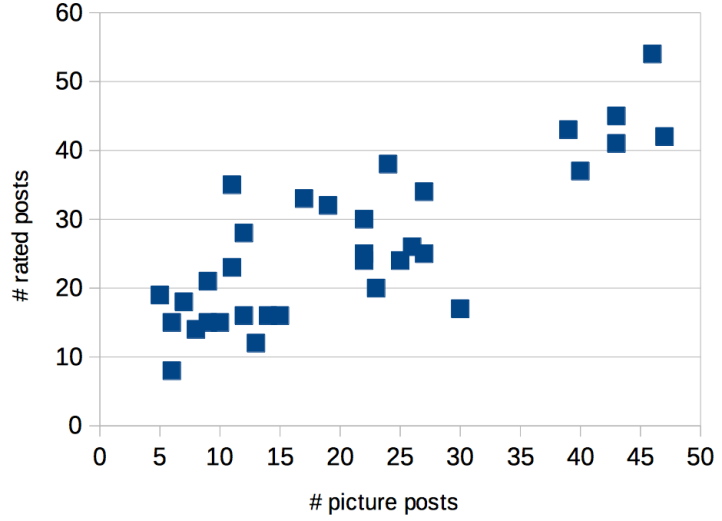 A simple corollary might be that if you want to improve your community, just post more pictures. Once we take the photo posts “out of the picture”, since we know that they’re likely to get rated, we can see that large communities produce an excess of liked posts (the below are not proper residuals – I deem some conclusions to be readily apparent while others may require that I crawl into a statistics program):

I initially thought the outlier communities were interesting, so I labelled them in the diagram. It seemed likely that these would be indicative of individual posts that got a lot of attention, attracting contributors from other forums, adding likes beyond what is normal for these communities. All three were picture posts.

As it turned out, I will need to do some hard statistics to correctly account for the effects of picture posts and community size, and really get to the bottom of which communities are the greatest. See you in future installments of this series!